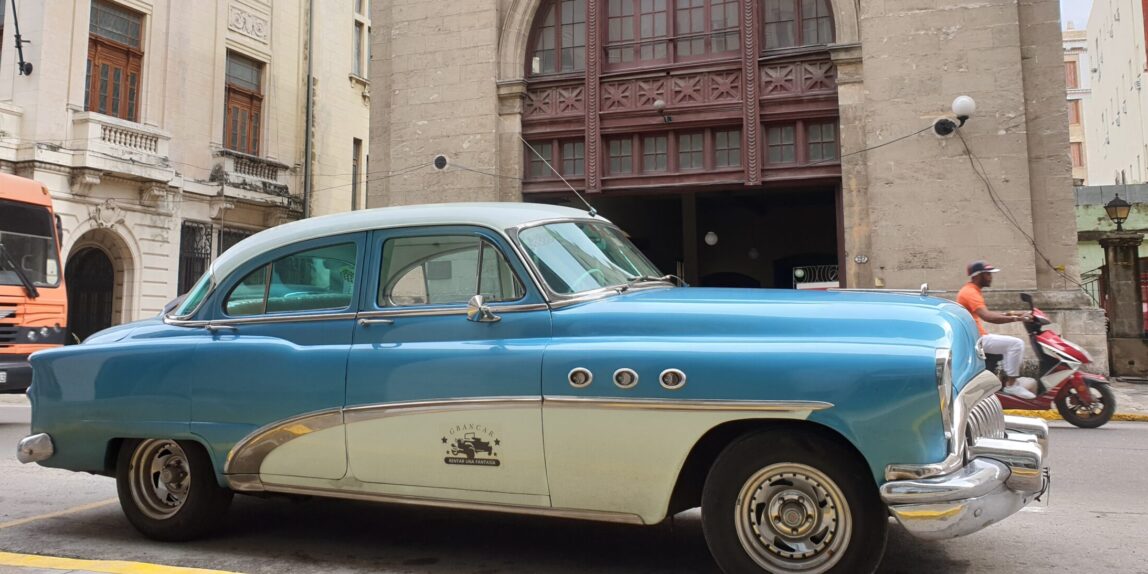 Cuba, the land of Salsa, Mojitos and Cigars. One would think this is the life that was made for the Gods, but in reality, these images just offer an illusion into a country still trapped in its cold past, battling to break free. The voluptuous Cuba seems to be bursting at the seams with suspense and possibilities, at each and every turn you take down its rugged chalky coast line, the mysterious Cuba lingers in my thoughts her complex and beautiful touch now just a distant thought in my memory that will forever be ingrained in my heart.

We were in a Baby Blue 1954 Buick heading down an open stretch of tar road, miles of sun kissed tobacco fields surrounding our every gaze, whilst giant great old palm trees dotted the horizon, as our make shift diesel engine roared off into the hilly distance. My hand in hers, the gentle sun falling down upon her soft shoulders, catching her beautiful smile. Come join us as we explore and take a ride back into the past. With fresh Mojitos on route, let’s take a long cold sip of imagination soured with a tiny squeeze of subjection and tarnished by an outdated, communist regime that battles to cling on.

Cuba, once the jewel and strategic strong hold in the Spanish crown has long been on our lists of places to visit. Ever since I was a little kid the sounds and rhythms of this Island has moved my soul and sparked my curiosity. Sometimes this could be a really bad thing, when one leaves too much to the untamed imagination and it can be a daunting task to live up to, however Cuba stole my heart and I can’t  wait to relive some of our adventures with you, some not worth the write home, others worth their weight in gold.

Cuba would become one hell of a curve ball of a country to negotiate, with many questions and very few answers, certainly a country that captures every bit of one’s curiosity. There’s a lot to talk about when describing the beautiful tropical island in the Caribbean, most travel blogs will give you the run of the mill prescribed journey like a pill, which to be honest could be a great starting point for anyone wanting to head to the country that has now been reinstated on America’s list of places not to go. However, that’s just basically because of poor leadership from both parties and a lack of knowledge in general for tourist out there on internet. We traveled from America and we had no problems crossing the borders regardless of what passport we had. The once great cold war, now over between the two giant countries, who were fighting an enemy that no longer seems to exist anymore in the minds of the youth who have been trapped by their brainwashes from the past.

We want to encourage more Americans in fact to travel to Cuba regardless of travel restrictions put in place the walls exist in one’s own mind, this is a country that is simply breathtaking at every turn and will transport you back to a time long gone and lost in an ever modernizing world, Cuba is bursting  with opportunity however, it has been suppressed by its government that originally gave them their freedom but in turn took their rights to vote and live in a democratic way. It’s remarkable to see how politicians and greed can be so misleading and unreliable, and Cuba is a great example of this, however we weren’t  going to let this stop us, and while so much is controlled by the government, including its travel industries, there are ways around it, in order to make sure that majority of the money is transferred to the people of Cuba who need the support of tourism. So, if you’re looking for an adventure, Cuba is where we are going so get your bathing suits ready and your dancing shoes on!!!

Fast forward to a Sunny Day, the two explores were on a dusty dirt road with two beat up old mountain bikes we rented from a local, we were up in the green, lush, low mountains of Viñales cruising the Tobacco and Cigar plantations in the gentle breeze. Viñales is an agricultural area, where crops of fruit, vegetables, coffee and especially tobacco are grown by traditional methods. Fishing is also an important part of the area’s economy and the area holds host to a vibrant tourism industry.

Viñales is a small town and municipality in the north-central Pinar del Río Province of Cuba. The town consists mostly of one-story colorful wooden houses with little porches to match. The Viñales Valley has hence been protected by the constitution and has been listed as a UNESCO World Heritage Site for the outstanding karst landscape and traditional agriculture as well as its architecture, crafts and music. The village of Viñales, which mostly strung out along its main street, has retained its original layout and many interesting examples of colonial architecture. Like pretty much everywhere in Cuba nowadays, there are a lot of casa particulares. A “casa” is when you stay in someone’s spare room, house, upstairs floor or any other part of their house. All “casa particulares” hosts have to be registered with the Cuban government and are safe to stay in, as long as they have the “casa particulares” sign outside the door, we had rented a casa up in the fields at Casa Azul. Mama Gabrielle was a wonderful host her breakfast sparing nothing but the kitchen sink, she looked after us so well, welcoming us in her little room with open arms, she really gave us an idea of how open and hospital able the Cuban people really are.

We found ourselves rolling down hills on a windy road on two, old, rickety bikes, the fields still smelt of freshly laid manure, being aided from the storms we had earlier, the pleasant smell of mother nature calling us to come have some fun. We rolled up and down the winey path, cruising past small little villages, and gigantic boulders and mountains, one even had its own build in night club, which of course we stopped at for a beer, the tall mountains around us, were engulfed by the encroaching bright green of forest that surrounded its borders. Wind in our hair, we cruised one by one down the bumpy road till we noticed a random restaurant in the open field. A large pig slaughter and roasting on a make sift box that was covered with local leaves know to so many as Lechon around the world. This indigenous people’s method has involved slowly cooking meat over a wooden mesh of sticks. In Spanish-speaking islands of the Caribbean, such as Cuba, the Dominican Republic, and especially Puerto Rico, Lechon is a common delicacy. Lechon consists of taking a whole pig, slicing it from the head to tail along the chest and stomach, and slow-grilling the hog as it is turned on a rod. Or another method that is roasted and covered with leaves, first used by Chinese rail workers in Cuba, these Chinese roasting boxes fulfill their promises by roasting a pig in half the time that was deemed necessary and trapping the moisture and heat and soon the “La Caja China” as it became know, spread throughout the regions of the old Spanish colonies as a special treat for the slaves.

We sat down to a live band playing in the foreground the sounds of the Caribbean, the table was covered with a royal blue table cloth, we sat on matching wooden garden chairs, sipping Mojitos under an ambitiously converted old garage, that tried to resemble a luxurious restaurant by sticking a neon fish tank in the wall. Thou the table was humble,the meal on the contrary was filled with all sort of delights, Lechon, rice and black beans and an interesting boiled and braised root called Yuca or pronounced Juka by the locals. You have to be careful in Cuba when ordering, the language barrier sometimes very daunting for those that don’t speak Spanish, so make sure you ask for a menu when doing so, this will also help when paying as some places are known to short change tourist, so make sure you keep an eye on prices. The meal was definitely  one of the most delicious that I had in Cuba, was soon digested and after sorting out our host we continued on our journey back up to our Casa for the evening, thou on completion of our journey my stomach now rumbling and churning, I began to worry about all that rice I ate, looking back now that rice was probably in the hot sun all day. I began to panic and feel a cold sweat develop across my fore head and not to soon after, I was hurled over trying not to stand in the many  varied colors of my projectiles that laid on the floor, my partner “Thank God ”a vegetarian opting out of our lovey bush feast, now hanging onto my valuables watching on as I continued to paint the cobble stones with an assortment of  luminous colors that crept up from within my underbelly. What a lovely site indeed, with the full moon in the distance. She took me home and made sure I wasn’t alone. Thou a lesson indeed to any brave travelers, take my word, always take a bit of whiskey and pro-biotics where ever you go. Unless you fancy painting the sidewalks in a Jackson Pollock style and you have yourself a travel partner that is as patient as mine.